It’s no secret that I love the internet.  Google is my BFF. Siri and I fight sometimes (she pronounces my last name as Con-FIN-o, not Con-FEEN-o.  Like she should really have a feature where you pronounce something for her and she learns it. It’s not rocket science.), and I don’t currently have Alexa running my house, but I do love me some internet.

I’ll admit, I’ve never truly understood the appeal of Pinterest.  To me, it’s vaguely like the idea of Tumblr (which is NOT a real blog.  This is a blog. It has writing AND stolen pictures. Not just reposted pictures.  Just reposting pictures without the writing does NOT make you a blogger!). You just post other people’s stuff to save it for later.  That’s never done much for me.

Granted, it was helpful when planning my wedding–only because after I had a nightmare dress experience at the first store my mother and I went to, my mother looked at my Pinterest, saw that I’d pinned the same dress three separate times, and called around for a store that carried it.  She found one, we went in, I tried it on, we bought it, the end. (I also watch zero reality tv*, so I had no desire to cry and be like, “Oh my god, I’m saying yes to the dress!” Gag.) 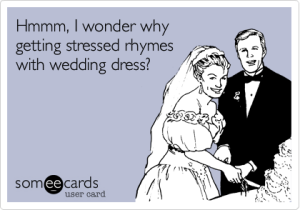 *I fully intend to hate watch the hell out of the Jersey Shore reboot.

So why do I hate Pinterest after it found me my wedding dress?

Easy.  It’s the Disney movie of motherhood.  Yes, I love Disney movies. But realistic expectations of men are not their forte.  Like if a dude comes up to you and starts dancing with you without your consent and tells you he met you in a dream so he already knows you in real life, that’s creepy AF.  I’m sorry, but no one is battling Ursala when he doesn’t even know your real name. Nope. And don’t even get me started on all of those princes kissing unconscious princesses.  But in a Disney movie? Oh my god, it’s so ROMANTIC! No, I’m not being sarcastic there. I don’t care how date rapey Prince Phillip is on paper, in Sleeping Beauty he’s awesome! 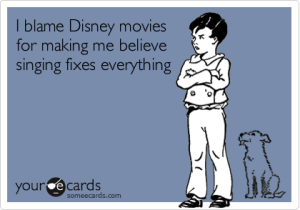 And that’s how Pinterest is.  You look at all these motherhood posts and you’re like “Wow, motherhood is SO dreamy.”  I’m almost a year in. Motherhood is not dreamy. It’s far from dreamy. In fact, what’s a dream?  Who sleeps anymore? What? 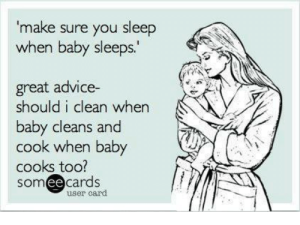 Pinterest is fine when you’re setting up your nursery (you know, pre-baby.  When you have time to do cutesy stuff). But once that little guy or gal is born?  Especially if you’re working full time, who has time for all of that?

Which brings me to the real problem with Pinterest (only took me 450 words to get there… oops): I am a surprisingly low maintenance mom.  I know, I know, no one who knows me would ever put the word “LOW” in front of maintenance when describing me as a person. But as a mom, I’m pretty laid back.

But Jacob is turning one in another week and a half.  Which means I have to plan a birthday party.

And all of these Pinterest moms are making me want to tear my hair out. 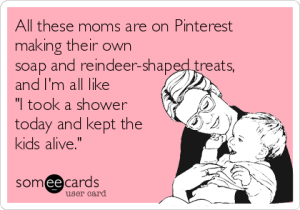 The original plan was to invite close family and a couple of friends who have kids (because why would friends WITHOUT kids want to go to a one year old’s birthday party?  I certainly didn’t pre-kids!), get a couple balloons and a cake from Costco, make a small smash cake for Jacob and call it a day. No fuss, no muss, no problem.

Apparently that’s not an acceptable solution for anyone involved.  Costco cakes, which incidentally, were good enough for my high school and college graduation parties, as well as my engagement party, my father’s 60th birthday party, etc, are apparently not good enough for Jacob’s first birthday because everyone I told that plan to said, “You’re really not going to make the cake yourself?”

Some background: I am an AWESOME baker.  It’s probably the only reason I have friends at school as I am also snarky beyond belief.  And in my younger and more vulnerable years, I used to decorate cakes. My grandma used to make all of our birthday cakes as kids and I eventually started “helping,” then ACTUALLY helping, then started making my own.

The last time I cared enough to do that was 15 years ago though.  So I turned to Pinterest. And somehow, in the last 15 years, cake decorating went from “cut a monkey head shape out of a sheet cake” to spending eight hours sculpting the perfect cake and using fondant at home.  I’m not doing that. A) Fondant is gross, as I learned from wedding cake testing and B) WHAT MOM HAS TIME FOR ALL THAT?

The problem is, now that I’ve seen all of these fantastical Pinterest creations, I feel like my cute little monkey cake plan will be pathetic and everyone will think I’m a bad mom. And my old cake decorating books from the 90s were no help at all because THIS was what passed for a monkey cake back then.

That’d be a bigger fail than those “1” penis cookies that made the rounds a few years ago.  (Side note, we went to a friend’s daughter’s first birthday party about a month ago. And the hubby pulls me aside, points in the corner and whispers, “Why do they have a dick balloon?”  I looked and it was supposed to be a pink “1,” but it would have fit in beautifully at a bachelorette party… we may not be emotionally mature enough to be parents after this many years of teaching high school!) 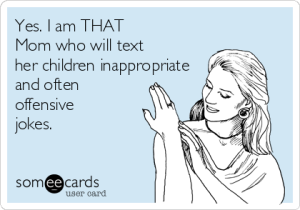 So I’m compromising.  I ordered a monkey-shaped cake pan.  I’ll decorate that, make a banana-shaped smash cake for Jacob, and call it a day. 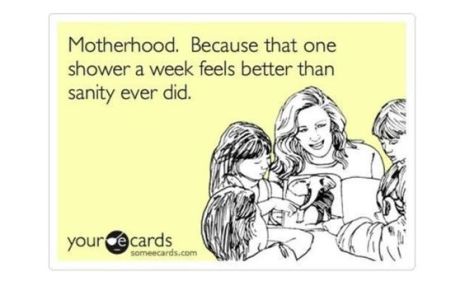 Programming note: I’ll be in California for spring break next week, so I probably won’t have a new post for you until the week after that.  See you then!