It’s amazing how boundaries disappear as soon as people realize there’s a tiny person growing inside of you.  Is it because they feel like the announcement that you’re pregnant is also an admission of “Hey! I had sex!” so they think you’re open to talking about ridiculously private things?

I honestly don’t know why it happens, but I do know that as soon as the placenta forms, people lose any semblance of a filter.

Now with my students, I get it.  They’re excited and curious and want to learn.  It’s still creepy when your high school students come up and rub your belly.  Especially the boys.  I had a kid who would literally get up, and I’d think he’d be going to sharpen his pencil.  Oh no.  He would just walk up and rub my stomach.  While I was teaching.  We had to have a boundary talk.  Multiple times.  But kids are excited and curious once they find out that you’re pregnant.

It starts immediately though, like well before you’re showing.  I did my cutesy Facebook pregnancy announcement at the start of the second trimester (I’m such a rule follower.  God, I kind of want to slap myself right now), and all of a sudden people were ridiculous.

I ate two donut holes one day–not donuts, donut HOLES.  Munchkins, if you will–from the English department office and another teacher said, “Guess you can let yourself go now that you’re pregnant, huh?”  Another teacher called me “wide load” that week and several coworkers rubbed my COMPLETELY FLAT belly.

Then came the fat shaming.

Yes, I got fat shamed while pregnant.

People started asking me how much weight I’d gained so far.  The answer I SHOULD have given?  “None… of your business!”

Instead, because I never come up with a snappy comeback on site (and I’m honestly not nearly as snarky in real life as I am in my blog.  Believe it or not, I live in genuine fear of actually offending anyone.  If I say something too mean in real life, odds are pretty high that I’ll apologize and cry), I tended to stammer out the correct amount.

Before I go further, let me explain–I’m a gym rat.  Or at least I was, pre-baby, when I had time to go to the gym.  But I’m still an exercise junkie, I just do it at home or while pushing a stroller right now.  So I worked out until three days before I gave birth (and only stopped that early because I was in the hospital for two days before Jacob was born), and gained exactly 25 pounds (my doctor recommended I gain 25-35 pounds, so the bare minimum of the healthy range).

“Wow, that’s a lot!” was a frequent response.

“Really?” a few said.  “I only gained three pounds when I was pregnant.  You’re already higher than that!”  (These people are liars, btw.  I remember their pregnancies.  They gained more than three pounds. They looked like manatees toward the end, just like every other pregnant woman does.)

Or, my personal favorite, “Oh, that’s not so much.  It just looks like more on you.” 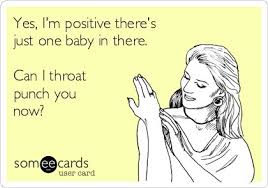 If every woman is hearing this kind of thing, I’m shocked that there aren’t more murders committed by pregnant women.

But to be honest, I would take the fat shaming ANY day over the awkward questions you get after the baby is born.

Those tend to fall into two categories (other than the ones from students, who have no shame asking about ALLLLL the gory details and who all think that since Kim Kardashian ate her placenta that that’s like a thing that all mothers do.  Um. No.). The “Are you breastfeeding?” and the “Was it a vaginal delivery?” questions.

Who asked me those questions?  Weirdly enough, everyone over the age of 55 that I encountered.  It’s like those were the popular questions to ask people in the 1970s, so they go around doing it now. 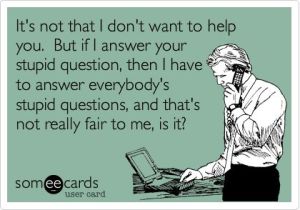 One of my old high school English teachers (a man, no less!) asked me if I was breastfeeding.  A long term sub in my building asked me about the delivery (I can’t keep typing “vaginal” without retching.  It’s worse than the word “moist.”).  A friend’s mother-in-law asked about both at a two-year-old’s birthday party.  And so on.  I’d list more, but I don’t want to call people out if they’re actually reading this.

And while I wouldn’t feel comfortable with someone asking me about such personal bodily functions under any circumstances, the fact that I struggled so much with breastfeeding made these questions painful.  I didn’t want to explain to people that I wasn’t the world’s greatest breastfeeder because everyone made me feel like I should be.  Being asked that was like being asked, “So are you succeeding as a mother?” And if I gave an honest answer, I felt like the people asking were going to think that I wasn’t.

I do know that no one asked awkward questions or made me feel bad about my weight with bad intentions.  But if you’re one of the people who asks new or expecting mothers those questions, it’s worth remembering that some people are struggling with breastfeeding and don’t want to talk about it (and the others are probably the ones whipping their boobs out constantly, so you don’t need to ask that question). Some people had emergency C-sections that completely went against their birthing plans and don’t want to talk about it.  And some people have struggled with eating disorders and body image and are having a hard time with gaining pregnancy weight.

Also, all of that is rude.  It’s not your business what my child is eating, what part of my body he came out of, or how much weight I’m gaining.  #sorrynotsorry