Halloween is giving me a newfound respect for my mom.  And making me freaking hate Pinterest even more than ever.

Granted, ’80s and ’90s moms had it easier because there was no social media.  So if your kid went out looking like a hot mess for Halloween, it only lasted one night–now the memories can haunt your child for the rest of their natural lives.

But my mom went all in for Halloween.  Probably because she was an art teacher and therefore crafty–like a mom, not a fox–by nature.  So our Halloween costumes were elaborate affairs that we spent months planning. And when we looked like hot messes, it was our own stupid faults for choosing an idiotic theme for my mother to execute.

Like when my brother chose to go as Elmer’s glue.  Or a lawn bag. But my mother, despite working a full-time job and being the only cook in our family, created those costumes in loving detail, painting a sandwich board to match a bottle of glue and bending green pipe cleaners to come out of the top of the lawn bag.

The year that my brother was a bottle of glue, I chose to be a Hershey’s Kiss.  So my mother crafted a suit out of chicken wire and a hula hoop, which she covered in aluminum foil, then made a pointed hat to match, with a Hershey’s logo affixed to the top, and dressed me in a brown turtleneck and leggings under it.  When I was Raggedy Ann, she made me a wig of yarn. When I wore my grandmother’s 1960s pink, knockoff Chanel suit and pillbox hat, she talked me out of putting brains on it for my Jackie Kennedy costume. And when I was Dorothy, as all brunette female children are at some point or another, they didn’t sell child-sized ruby slippers on Amazon for $11.99 like they do today, so my mother painted a pair of Keds red, then dipped them in a mix of red glitter and sequins.

Flash forward to me as a mom?  I spent $36 on a baby Cookie Monster costume off Spirit Halloween’s website.  I didn’t even go to the store. 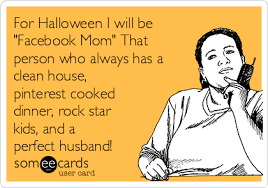 I wanted Jacob to be baby Bruce Springsteen, in a white t shirt, jeans, red bandana, a red baseball cap in his back pocket, and his toy guitar.  Hubby didn’t love the idea. He wanted him to be something cute and kid-like.

I voted for baby Luke Skywalker.  Yes, I’d be buying the costume, but the dogs already have Ewok costumes (which was probably a big waste of money.  They already kind of look like Ewoks. But whatever. Dogs are people too.) Hubby vetoed that one too. Which was totally unfair because Jacob recently demonstrated how awesome he’d be with a light saber when we took him to Home Depot and he found a PVC pipe that he ran through the store screaming and brandishing as a sword.

At this point, I began pouting because this is probably the last year that we can pick a costume for him before he starts exerting his toddler Jedi-mind tricks (aka throwing a tantrum) if he doesn’t get his own way.  And last year, his first Halloween, we matched his costume to the aviator theme of his helmet (which I had wanted to have wrapped to look like R2D2 and still think would have been a better costume. Yes, I’m a huge Star Wars nerd.  But as an ’80s kid, our only brunette heroines were Dorothy and Leia. So basically I’m obsessed with shoes and Star Wars. Blame society.), so I didn’t get to have fun with that one either.

And because he’s related to me, next year, he’ll want to be something weird like a Starbucks cup or a stapler.

We finally agreed on Cookie Monster because Jacob loves the number of the day song when we watch Sesame Street.  He prefers the Count’s version (and gets up and stomps his feet along with it), but the Cookie Monster costume was cuter, warmer, and more easily obtained on the internet.

Then I told my neighbor the plan and she said, “That’s easy.  Just buy him a blue sweatsuit and glue some eyes on the hood. Done!”

I looked shamefacedly toward the ground.  “I kinda ordered it online,” I mumbled.

I trudged home, the guilt of my generation’s lack of creativity coming off of me in waves. In my defense, store-bought costumes have come a long way since the horrifying plastic He-Man masks of the ’80s.  But the fact that my mom made all of those costumes from scratch every year impresses me now. Because ours never looked like a pair of sweats with eyes. Ours were handcrafted masterpieces that would have held up even on social media.

Of course, the irony isn’t lost on me that, at the time, all we wanted were those crappy store-bought ’80s nightmares.  But my mom insisted on making ours from scratch every year, probably to save money. Yet, looking back, those handmade costumes were the best and I wish I had the creative energy to do even half of what my mom did.

The good news is that we Jews get a second chance at Halloween.  So I have time to step my mom game up before Purim rolls around.

Or he’ll be Cookie Monster again.  Or I’ll wear Hubby down about baby Bruce Springsteen.

We’ll see how guilty I feel by then.